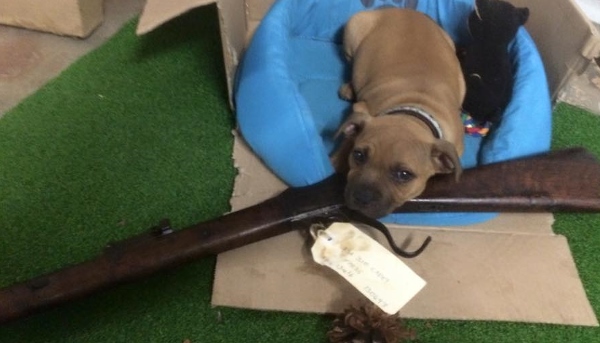 I came into the world three months ago, maybe that is too young to start writing but I was inspired by my great grandfather Jimi Hendrix. I got about to reading some of his editorials while working at Owen Guns, four days a week I assist the family by licking the floor clean and redesigning the employees shoes. As I am new to the world I like to test everything in my mouth, I put everything between my jaws just so I know what it tastes like. Knowledge is power and there are always new things to chew especially at the shop. Just the other day 50 new air rifles arrived and I licked the freshly oiled steel of a species known as Beeman, the Walnut stocks of a Zastava and most appealing of all bubble wrap. Today, a customer phoned up, as he had bought a second hand Brno Model 2 and it had teeth marks in the plastic magazine. Immediately, I was the chief suspect, interrogations began, and it looked bad for me for a while, but Wonderful Wendy came to the rescue and pointed out that the rifle in question had been on the layby rack for 6 weeks and out of the range of my teeth.

Although I spend most of my day lying half on, half off my luxurious dog bed I do listen in to the humans conversation quite a bit. One hot topic I’ve pricked my ears up for was the proposal from the government to ‘re-categorise’ lever-action into the restricted Category C gun class instead of the general category A. This could lead to a buyback of the thousands of lever-action rifles and shotguns already legally owned by Australian shooters. It seems like a cruel game to me. I mean I sometimes make my old girl run around our five acre property trying to catch me but I know when to call it a day. From what I’ve discovered in my short time here is that gun owners have had it tough the last couple of decades. The gun buy-back scheme started on 1 October 1996 and concluded on 30 September 1997.The buyback purchased and destroyed nearly 1 million firearms, mostly semi-automatic .22 rimfires, semi-automatic shotguns and pump-action shotguns. Only Victoria provided a breakdown of types destroyed, and in that state less than 3% were military-style semi-automatic rifles. In some cases the government paid the gun owners for what they took but in a lot of instances they could not possibly compensate all. My old girls even older, old man will never see the millions of dollars the government stole from him or the beautiful firearms they seized. The government is yet again targeting innocent, responsible gun owners just to seem as though they are doing something about terrorism.

The team at Owen Guns have been hard at work expanding the premises so that one day soon all of their extensive collection can be displayed in a museum. This will free up space in the shop so that we can have space for even more new species. I have been assigned the task of writing a piece every week about all the tasty new masterpieces. Don’t get me wrong though the older rifles are just as scrumptious if not more so, they have a more refined flavour, a good slathering of Gun shiner and tasty leather slings. They all have a story to tell, just the other week my old girl pulled out a Mannlicher Steyr from 1893 it hadn’t been very well looked after unfortunately and looked as though it had been swimming with the MSS Titanic. The rust was so well imbedded that it took the astounding strength of Mr Terry Clark to take it apart. For three days the barrel, bolt and nails were soaked in a molasses bath which cleaned off a great chunk of the brown corrosion. It was impressive how powerful sugar is, how it can just tear into the toughest substances and destroy, makes you think twice before indulging in a hot treacle pudding or a 2L bottle of coke. I think twice and eat it anyway, I’ve probably only got twelve years in me (if Im lucky) and I can handle a little bit of constipation and tummy ache that’s “future Chester’s” problem anyway. Back to the decrepit Mannlicher. After is sugar bath my old girls even older, old man gave her a new chemical to try and resurrect this tragic piece. It is called ‘rust remover’ I know super original but despite the unimaginative name it really did the trick in cleaning up this seemingly lost cause. We sell it now in the shop for the meagre price of $65 and its 100% organic if that’s something your into. Or if you haven’t got anything rusty just come in and give me a pat and ill give you a slobber and a chew.