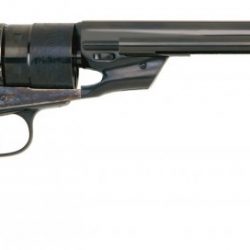 With his 1871 patent to convert percussion, front-loading revolvers to breech loading metallic cartridge arms, Colt employee Charles B. Richards was able to inexpensively convert the company’s arms already in stock to the new self-contained cartridge system. Colt also produced a number of them, once the old percussion parts ran out, as newly manufactured breech loaders. This, the first truly practical method of updating their guns to handle the then-new metallic cased ammunition, allowed Colt to sell these sixguns at a competitive price of just a few dollars, compared to other metallic cartridge revolvers. In total, around 9,000 Richards Transition Models were manufactured between 1871-1878. Their low cost, combined with their modernization proved popular with folks, especially in the Western territories. Wild Bill Hickok was believed to have packed Richards conversions in his last years.

In order to get Cimarron’s …