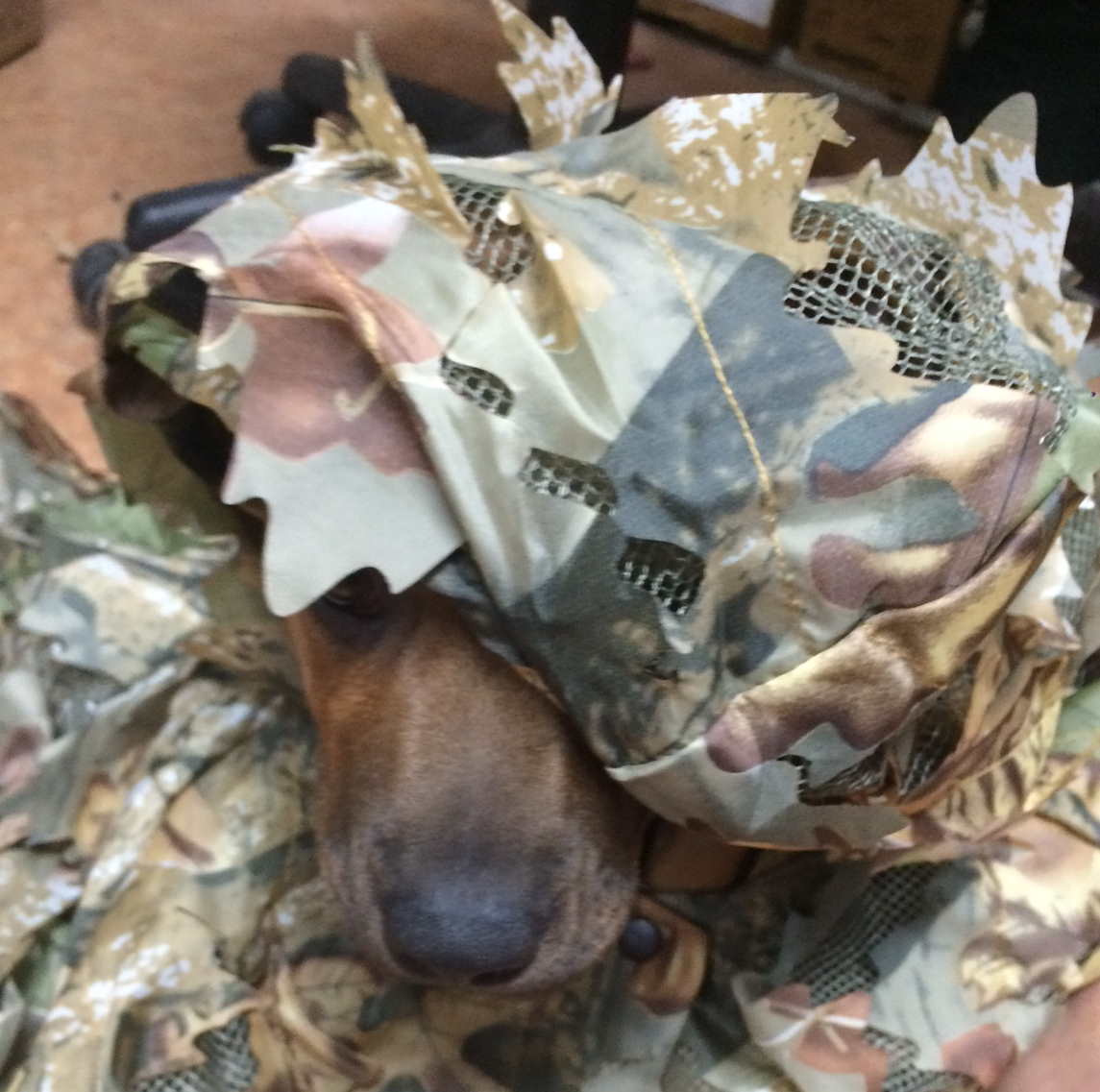 I don’t fit into my camo yet!

I return to work at least 2kgs heavier, the Festive Season was everything I expected and more. I was surrounded by humans that adored me, I single handedly destroyed every box and piece of Christmas paper in sight, food seemed to fall from the heavens I even got my chops around some Christmas cake when my old girl wasn’t looking. My best mate Ollie (a chocolate Labrador) came over and he let me chase him all afternoon. At the end of it all I was weak with exhaustion and could barely stand, I also felt sad because it was all over and all my friends had gone home. The excitement didn’t end there because days later it was New Years Eve and all our valued employees from Owen Guns came over and there was more food! Then just yesterday my ‘old girl’ and I moved into a new home with my good mate Ollie. This time of year is really crazy the shop has been buzzing non-stop with customers and even a few have been of the canine variety, come to see me of course! I’ve been working hard to lick floor clean with tongue and nibble of unsuspecting customers just to be friendly. I love our smoko breaks I get along well with all the staff I think they really appreciate my work, I can undo anyone’s shoelaces within seconds and that is a valued skill. The conversations are always entertaining between colleagues one in particular really grabbed my attention it was centred around one of the most famous war dogs called Stubby. I immediately put my detective hat on and tried to find out all I could about Stubby. 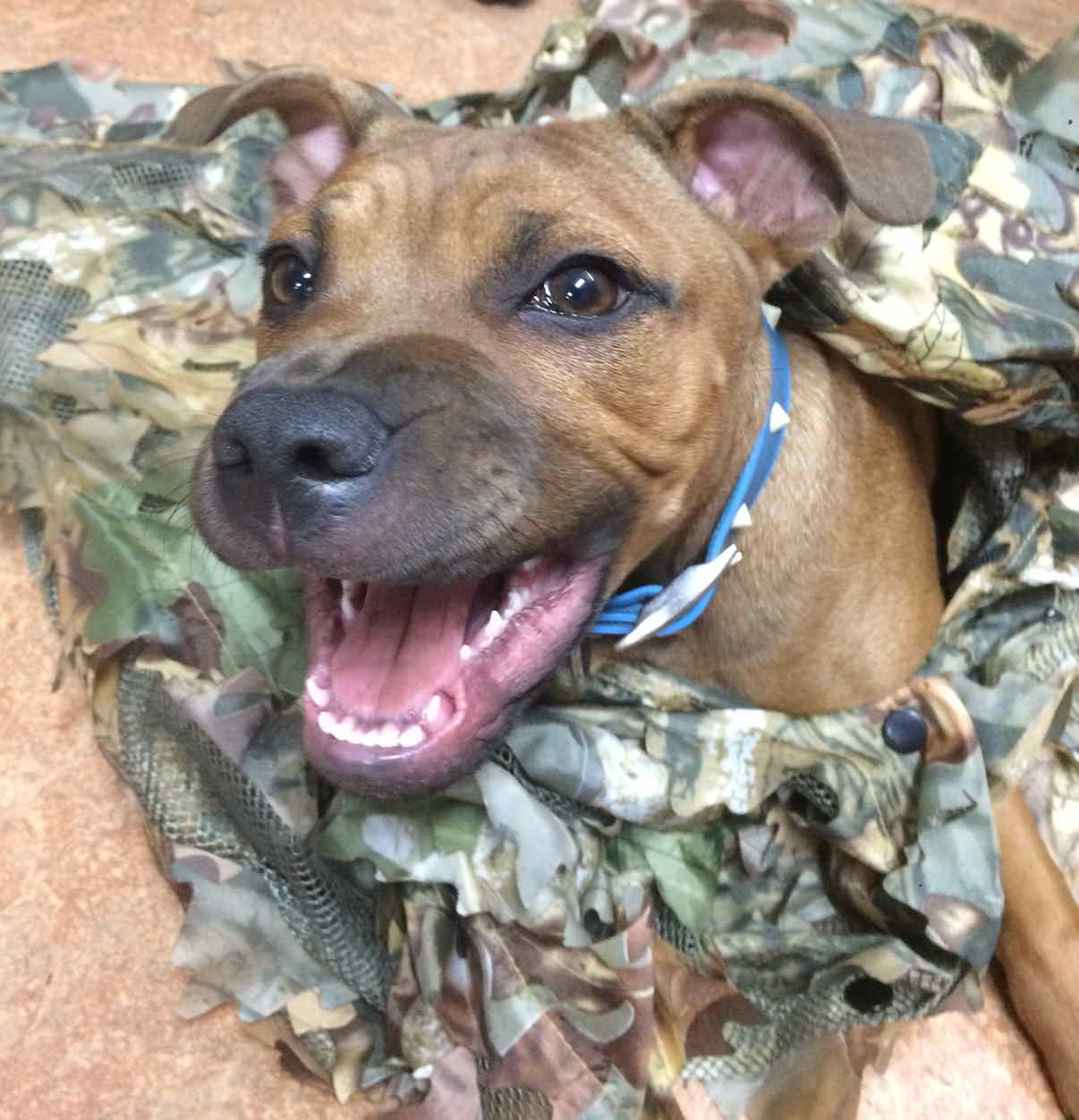 Im ready to fight though!

Sergeant Stubby was a stray, homeless mutt who saved more lives, saw more combat, and performed more feats of heroic awesomeness than most people could ever hope to accomplish. 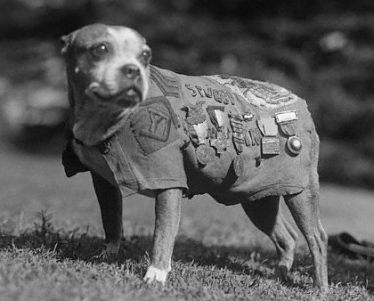 Original caption: Washington, DC: Meet up with Stubby, a 9-year-old veteran of the canine species. He has been through the World War as mascot for the 102nd Infantry, 26th Division. Stubby visited the White House to call on President Coolidge. November 1924

The American Pit Bull Terrier started his humble life as most stray animals do – hungry, cold, alone, and stranded in the town of New Haven, Connecticut. Living garbage can to garbage can without so much as a doghouse roof over his head. One day this poor dejected little canine happened to stumble onto the parade ground on the campus of Yale University, where it just so happened that the men of the 102nd Regiment, 26th Infantry Division were training for their eventual deployment to fight in World War I. The little dog was taken in by a soldier named John Robert Conroy, who named the pup “Stubby” on account of the his little stumpy tail. Conroy started leaving food out and let the little guy sleep in the barracks from time to time, and before long pretty much every soldier in the 102nd had accepted Stubby as one of the lads. After just a few weeks of hanging around the drill field, watching the soldiers do their thing, this incredible dog learned the bugle calls, could execute the marching maneuvers with the men, and was trained to salute superior officers by raising his forepaw to his brow.

Private Stubby had free reign to drink out of any toilet bowl on the Yale campus during training, and when the order came down for the 102nd to ship out to battle Conroy just squeezed the dog into his greatcoat and smuggled him on board a ship bound for France. Once the transport was under way, Conroy brought the dog out onto the deck, and all the sailors decided this dog was truly one of them so they had a machinists’ mate make him a set of dog tags to match the ones worn by the soldiers. When Conroy got a little sloppy and his covert dog smuggling operation was discovered commanding officer, Conroy gave the order to, “Present Arms,” stubby then saluted the commander. From that point on Stubby was officially allowed to follow Yankee Division out to the battlefront. 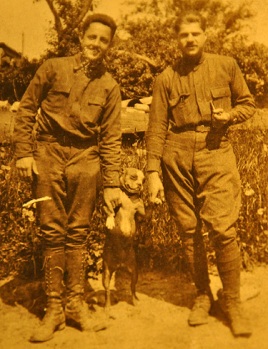 Stubby with his mates

Stubby became the official mascot of the American Expeditionary Force, and did his part to raise morale to the war-weary soldiers on the front lines. During his tour of duty in Europe, Stubby also participated in 17 battles and four major offensives – including the St. Mihel, Meuse-Argonne, Aisne-Marne, and Champagne Marne campaigns. In February 1918, while fighting in a heated sector north of Soissons, Stubby found himself under constant artillery and sniper fire for over a month straight with no respite, responding by howling and barking in “a battle rage” every time gunshots started ringing out. He was wounded in action later that month in a chemical weapons attack, when the Germans launched some mustard gas that poisoned the little dog so hard it nearly died.

Stubby didn’t let this brush up with chemical weapons get him down, instead he used his heightened sense of smell to sniff out mustard gas before it became lethal. From that point on, any time a gas canister exploded near American lines, Stubby would run up and down the trenches barking and biting men until they put their gas masks on, an act that saved countless lives. Once his comrades were properly masked-up, Stubby would run and hide until the gas cloud cleared (because this was back in the days before they’d invented doggy chemical warfare hoods).

In addition to providing early warnings for chemical attacks, Stubby could also use his sharpened dog-hearing to detect artillery fire before the shells started exploding – a trait that earned him the gratitude of many men. On top of all this, Stubby could sense German ground attacks – as soon as the Huns would go over the top, Stubby would sniff the bratwurst coming and run over and bite the nearest American sentry until they sounded the alarm. It didn’t take long for them to learn that if the dog started being crazy it was time to hit the deck.

In his spare time Stubby was running around through No Man’s Land looking for wounded and dying Allied soldiers to rescue. According to first-hand accounts, this dog could hear English being spoken, and he’d immediately run over and check out the wounded man. If the soldier was able to walk, Stubby would lead him back to friendly lines. If the injured man was too wounded to move, Stubby would stand there and bark until a medic arrived. 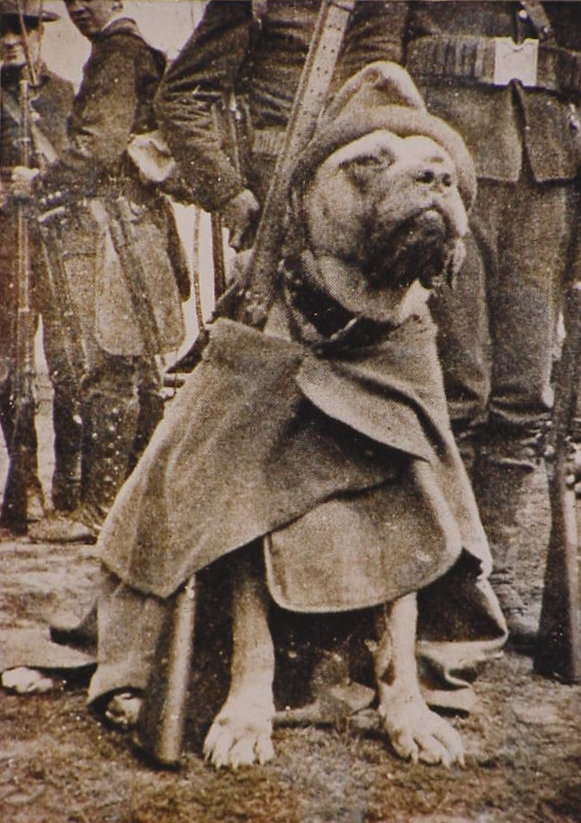 Stubby in his battle digs

Stubby the War Dog was wounded in combat in April 1918, when he was hit with a German hand grenade while participating in the assault on the German town of Schieprey. Despite receiving shrapnel wounds to his forelimbs and chest, Stubby survived the grenade blast, lived through some emergency surgery, and spent his recuperation time cheering up the wounded men in the field hospital. He returned to action a few months later and helped participate in the liberation of Chateau Thierry, a deed that the French were so grateful for that they made him a chamois blanked decorated with the flags of the Allied countries to thank him. The men of the 102nd, for their part, made Stubby a jacket designed to look like an American military uniform, and then they decorated it with Stubby’s name, rank, and medals – medals that included the Purple Heart, the Republic of France Grande War Medal, the Medal of Verdun, and medals for every campaign in which he’d served.

While serving in the Argonne Forest during the Meuse-Argonne campaign of September 1918, Stubby was patrolling the trenches when he discovered a camouflaged German spy hiding out mapping the Allied trenches. The German turned and ran for it which was just the opportunity Stubby was looking for. This man had no chance Stubby was able to not only catch him but with his locked his jaw shut he held him there until Americans showed up to arrest him. For his actions, he was given a battlefield promotion to the rank of Sergeant, which, awesomely enough, meant that the dog now outranked his owner, who was only a Corporal by this point. Stubby became the first dog to be promoted to a rank in the army and when the Americans brought the German spy back to camp they stripped the prisoner of his Iron Cross and pinned the German military medal on the dog’s jacket instead.

After the war, Sergeant Stubby was smuggled back to the states, where he was an instant celebrity. He inducted into the American Legion, offered free food for life from the YMCA, and whenever he went out of war bonds promotion tours five-star hotels would relax their “no dogs allowed” policy for the canine war hero. He went to the White House twice, met three presidents, and in 1921 the American overall commander “Black Jack” personally pinned a one-of-a-kind “Dog Hero Gold Medal” on Stubby’s military jacket.

Sergeant Stubby, American war hero dog, died in 1926, at the (approximate) age of ten. Nowadays his taxidermized corpse is featured with its own exhibit at the Smithsonian’s Museum of American History.