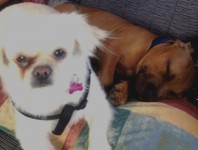 On my time off this week my old girl and I travelled to the big smoke of Brisbane. It was incredibly different from the peaceful country side that Im acquainted with. When I first stepped out of my chauffeured motor vehicle I was hit in the face with a 1000 sounds, sights and most of all the smells. People moved in every direction and it was hard to know which ones would give the best pats and affection. I was in my element making it my personal task to say ‘hello’ to as many as I could, children were my number one priority because they to are small and friendly. Some of the city folk didn’t even acknowledge me but my old girl said that they weren’t worth my time anyway. She loved meeting all my new friends and I loved being told repeatedly that I was SOOOOOO CUTE! We started out on a leisurely stroll through New Farm Park, I was doing great on the way to the river but my old girl had to carry me back, my suit just gets too hot sometimes and I cant go on. It was ten O’clock and I was already exhausted but my old girl had big plans for our trip to the city so I pushed on and we visited a nice tiled apartment block where I was given water to drink/splash in and lots of pats from a girl called Louise. At lunch time we went to the park again but we didn’t have to walk so far and there was a circle of people cheering my name when I arrived. They all seemed to know who I was maybe they have read my editorials? I sniffed and chewed them all and when they weren’t looking I stole a punnet of blueberries from a bag and inhaled the lot. Then we were off again, our next destination was a big house with a sufficient backyard and the people there new who I was again. I had no idea my fame was travelling so far, so quickly, I tried to play it cool don’t want them to think I’m getting big headed about it. These humans were really nice to me as well and even treated me to a fish head for afternoon tea. I can’t remember when I crashed out that night but my old girl carried me to bed, this fame thing is really exhausting at times. But it has its bonuses because the next day I was in this new backyard burying a chicken neck when the most lovely of the dog species sauntered up to me. 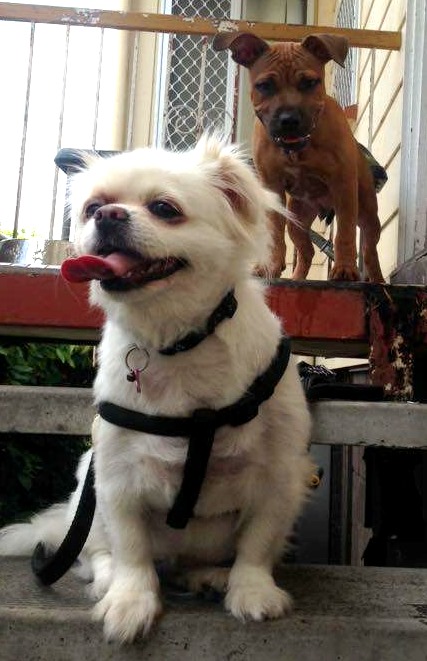 The first time I laid eyes on her.

She was breathtakingly beautiful and smelt like rancid beef mince. She soon new who I was too and completely submitted to my charms. We spent possibly the greatest day of my life together, we ran along the beach, splashed in the water, I dug holes and she filled them in. I thought we would spend the rest of eternity together but it wasn’t meant to be. She said she couldn’t do the ‘long distance thing’ and trotted off without a care in the world. I guess she has a lot of fella’s who live a lot closer that she can snuggle up to, chew on and dig wholes with. My old girl said that there is plenty of fish in the sea but I don’t think I would have the same connection with a fish.

I have thrown myself into work this week to keep distracted from my heart ache I have torn a hole in a spare mattress at home, pulled out another one of ‘she who must be obeyed’s’ plants, chewed up a few empty cartridges and caught up on my reading. I fell upon another canine hero this week and felt his story needed to be shared.

In the silence of darkness, the Airman Robert Throneburg and Sentry Dog Nemo patrolled near a graveyard on Tan Son Nhut Air base on the night of December 4, 1966. On security patrol, Nemo alerted Throneburg to a group of hidden VC.”Watch him,” said Airman Throneburg. The dog’s muscles tensed for action.”Get him!” — was the next command and Nemo lunged savagely forward, into the enemy’s nest. Airman Throneburg followed close behind. 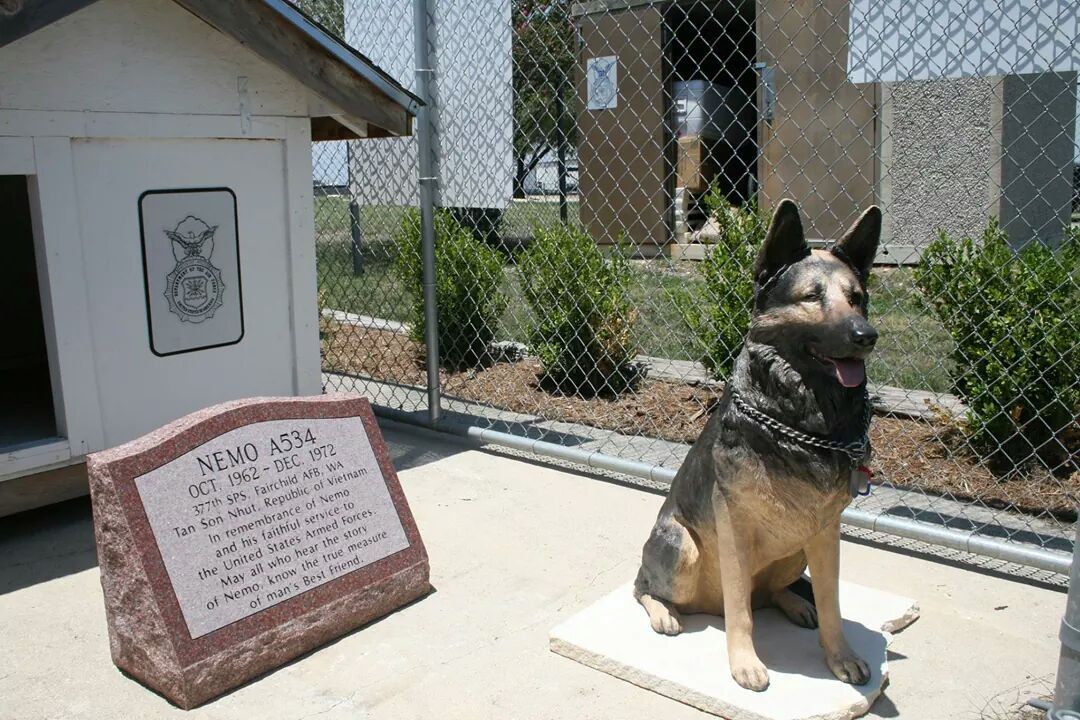 In the first moments of encounter, Airman Throneburg and Nemo killed two of the VC. But, before additional security police could reach them, Airman Throneburg was wounded in the left side shoulder and then spun by the first bullet wound and was wounded again in the back left shoulder. After being wounded Throneburg radioed the insurgents locations before passing out. In all the action, Nemo’s eye was hit and his snout was creased by enemy bullets. Despite being wounded and blinded in one eye, Nemo returned to his handler. Crawling across Throneburg’s body, Nemo guarded his handler against any who dared to come near until medical help could arrive. The residing Vet had to eventually be called in to remove Nemo from atop his handlers body. The remaining enemy were soon killed by other security police.

Due to his heroic actions, after receiving his injuries Nemo was returned to Lackland Air Force Base in the United States where he was given a permanent retirement kennel. He continued working as a recruiting dog and died in December 1972 at Lackland where his memorial kennel and stone stands today in his honor.

Although I am just a mere editor for Owen Guns I am inspired by this dogs bravery, loyalty and quick instincts. Even though the love of my life dropped me like a piece of cooked celery, I still have my old girl and we look after one another.