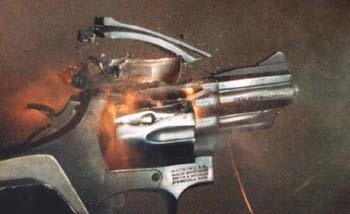 At this stage you have no second chances.

Obstructions in a firearm barrel are almost certain to damage the barrel on firing.
The kind and amount of damage depend on location of the obstruction, on its mass (weight), and on the type and thickness of the barrel. A very great variety of results are possible. I have known of them killing the shooter next on the firing line, and only giving the owner of the firearm a sore shoulder. This is the extreme but it can and does happen.

An obstruction close in front of the cartridge in the chamber has the effect of increasing the chamber pressure. An obstruction in the middle or forward part of the barrel produces a local injury.
The action of an obstruction does not depend on trapping air. Experiments with coils of wire and other open obstructions resulted in damage about the same as solid obstructions of the same weight.

The action of an obstruction at or very near the chamber appears to be simply that of increasing the projectile weight, of course raising the powder pressure accordingly. Damaged to the firearm and shooter depends on the extent of this pressure increase, and on construction of the action and barrel breech and strength of the cartridge case. Often these withstand a moderate pressure increase without harm.

The action of an obstruction at middle or forward part of the barrel appears to result from impact of the bullet or shot charge against the obstruction. The resultant injury is located at that place. It is always a characteristic ring bulge or burst. Its severity depends on weight of the obstruction, sometimes apparently assisted by a wedging action from pointed bullets; on the speed with which the projectile strikes the obstruction; and on strength of the barrel wall at that point. A light obstruction makes only a small ring bulge, and such an item as a bullet jacket may be ironed into the rifle bore by successive bullets and not be noticeable. A heavy obstruction results in a heavy ring, which if sufficiently severe shatters or severs the barrel at that point, without effect in the barrel elsewhere.

As an example to bring this out, it was at one time the practice of a demonstrator of a well known automatic rifle to stick the rifle muzzle in mud, fire and blow the muzzle off, do this again with the remaining barrel, and continue until the barrel was not much more than half its original length. This was announced as a striking demonstration of the rifle action strength. In reality it was an imposition, since the stress produced in this situation is purely at the site of the obstruction and there is no special effect on the rifle action.Of course a barrel made of seamy or burnt steel may burst of its own weakness, without any obstruction. In that case the appearance of the burst barrel is quite different. This is brought out from time to time when a shooter claims a burst was due to barrel weakness but it is found to have resulted from firing with something left in the bore.

A type of obstruction burst to which shotguns are liable is that from getting a shell of smaller gauge into the gun. This happens most often from a 20-ga. shell in a 12-ga. gun. The 20-ga. shell drops through the chamber and enters the bore until stopped by its rim catching ahead of the chamber. Since the chamber is left empty it may not be noticed. In that position it not only is a heavy barrel obstruction, but also it may be fired when struck, by the charge of a normal 12-ga. shell fired behind it. Such “12-and-20” barrel bursts are likely to be quite bad. In general, while shotgun breech actions have a wider safety margin than many rifles, shotgun barrels, because of their comparative thinness, are readily damaged. 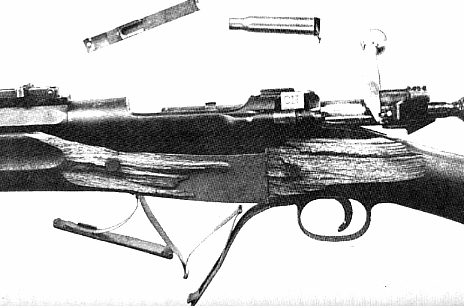 It is probable that most barrel obstructions are in the middle or forward bore. The most widespread misconception about obstructions is that those of this type ‘blow up’ or disintegrate the gun. Firearms can be blown to tiny bits, but rarely that way, still having half the barrel blow out and lots of hot gas and fast flying steel and wood is exiting enough and is called a blow up.

There seems to be absolutely no danger in firing through one of the conventional muzzle caps sold for rifles. As you can see, these caps do not enter the bore in any way and, in effect, are on the outside of the gun rather than inside the bore, as is the case with an obstruction. In our part of the world most damage is caused by the mud wasp, that loves a barrel to nest in. Depending where it happens to be situated is the factor that decides if a remedy can be achieved by a mortician or a gunsmith trimming the barrel and re-crowning.