An injury to the muzzle of a rifle can cause shots to keyhole. This condition is most likely to occur in rifles cleaned from the muzzle, but may be due to accident, such as striking the muzzle against any metal.
A very small burr on the muzzle crown can make the bullets unstable in flight. 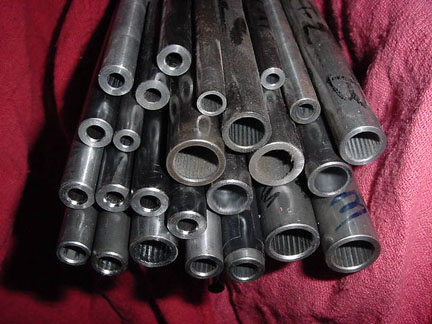 The Most Important Part Of The Rifle Barrel.

Anything that reduces the rotations per second may cause a bullet to tip. Low bullet velocity may reduce the spin enough to cause this effect. A long bullet requires more spin than a short one, so that too long a bullet for the twist or too slow a twist for the bullet may cause tipping. Excessive wear of the rifling or too loose a fit of the bullet in the barrel may cause the bullet to fail to take the full spin required.
As barrel erosion progresses, the portion of the barrel just forward of the bullet seat becomes enlarged and channelled out. When this occurs, tipping or keyholing shows up, partly due perhaps to the distortion of the bullet as it slaps into this enlarged portion of the barrel, and partly due perhaps to failure of the worn rifling to grip the bullet sufficiently to spin it fully. In barrel life tests with rifles and machine guns the appearance of tipped or keyholed shots on the target is usually the first sign that the barrel is approaching the end of its useful life and should be replaced.
Even in the absence of any of the disturbing factors mentioned above, some types of bullet such as revolver wad cutters may show a certain amount of tipping which seems inherent in the bullet shape. In such a case it will be noticed that the bullet often makes elongated holes, or keyholes, in the target. This leads to the belief that the bullets are tumbling, or turning end over end. Despite this appearance, the bullets probably are not tumbling.
One example was a 25-06 in a known brand that would shoot well with 120 grain bullets but would in variable key hole 87 grain bullets through the targets at 200 metres. This was due to twist rate problem stabilising the large bullets but not the shorter 87 grain ones.
A good idea of their actual motion can be obtained by firing through a series of paper targets set up at close intervals-2 ft. is usually suitable. When the spin is insufficient, the holes will show the bullet assuming a greater and greater yaw at first, but after reaching a maximum the yaw then decreases to nearly zero. This cycle is repeated with the amplitude slowly decreasing. A bullet yawing at 30° or 45° makes a very bad keyhole, looking as though the bullet were nearly broadside on, but measurement of the holes in comparison with the bullet length reveals it never reached broadside. 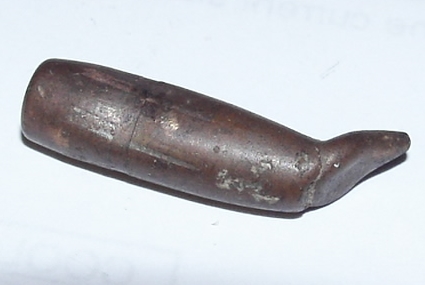 Normal bullets fired from insufficient rifling twist, in any rifling likely to be encountered in practice, thus do not tumble but instead swing as described.

The 1 twist in 66 inches shown above is an example from a Muzzle Loading Rifle, the Round Ball has a very short bearing surface in the barrel, and would strip off, if the rifling twist was two quick. Conversely, elongated bullets having a longer bearing surface need a much faster twist to gain stability.

The tremendous dispersion of shots fired under this condition of insufficient rifling twist is due to the deflection of the bullet in its first yaw, the direction is usually random. 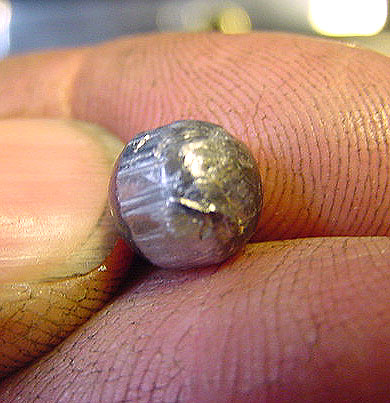 Round Ball showing the Bearing area, where the Lands have engraved the Ball.