From the man who brought us the Lee Reloading Equipment that nearly every Australian shooter has used some of, at some time either before now, or sometime in the future. 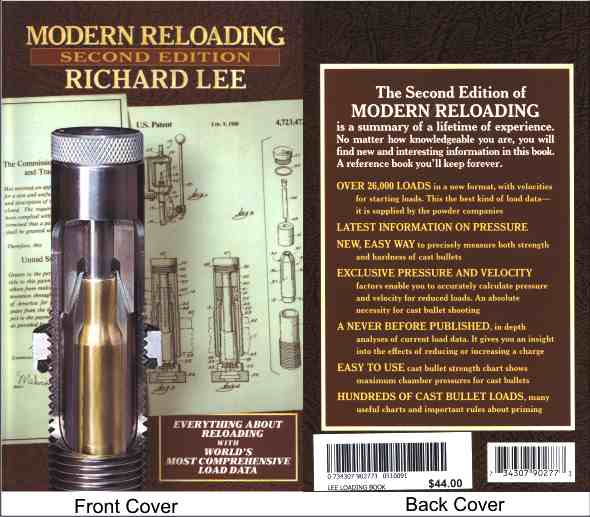 by: Richard Lee          720 very comprehensive pages.
Ammunition reloading for the shooter, hunter and professional reloader, with detailed loading techniques for quality and quantity production.
Extensive information about special methods and tools so anyone can load more accurate ammunition.It covers reloading for rifles, handguns and shotguns, bullet casting, powder selection and measuring methods.
Includes much information that was previously unavailable from any source, along with must have charts.
Comprehensive load data, compiled from all major powder suppliers published information, sorted in logical cartridge, bullet weight, and velocity order.
The first book to print starting loads that are suitable for volume measuring.
NEW
Exclusive cast bullet loads with velocities and pressures so you can match the pressure to bullet strength.
Includes velocities for starting loads.
Data on many additional cartridges.
Exclusive pressure and velocity factors so you can easily calculate
velocity and pressure for reduced loads.
Cartridge drawings with the year of introduction, usable case volume and primer type.
Expanded information on pressure and reduced charges.

Preface
Wow! Modern Reloading has been a smashing success-over 120,000 copies sold. The old adage “If it’s not broken don’t fix it” should apply, but I felt compelled to improve on the book by including the latest and best information. The new load data is greatly expanded and includes velocities for the starting charges. Important new load data for cast bullets takes the “black magic” out of cast bullet loads.
I have neither the inclination nor talent to radically change the first part of the book. That information is accurate and timely so it remains mostly the same except for many additions and a few corrections. If you don’t have the first edition of Modern Reloading don’t worry, this book has all of the first edition and much more.
An unusual number of readers commented that normally they buy a reloading manual for the load data and don’t bother reading the articles. However, they read every word in the original Modern Reloading. Even if you have the original book you will find it interesting to read the first part of this book and note where my opinions have changed. If you’re like me, you may find some gems of information missed the first time around.
Like you, I learned new and interesting things in the last six years. That which I’ve learned related to reloading is included in this second edition of Modern Reloading. I underlined all the titles that are new so you won’t have to search for them. Be sure to read the new Chapters 9 and 10. You will find them interesting and informative.
This book is a labour of love. I’m retired and receive no pay, salary nor royalty. This reduces your cost to buy it. My reward is the immeasurable pleasure sharing my thoughts with you. It’s much like a conversation with a group of friends at the range or clubhouse and I get to do all the talking. The words come easy, the hard part is to be certain that you are never mislead by my prose. Thank you very much for sharing your time with me as you read this book.
Richard Lee