Welcome to the September Edition of the Owen Guns Bulletin.

Scroll down for free Firearm Manual

Only until Stocks last due to the stronger US Dollar. Last year we had to pay $600 for one of these. Leupold the Leading Scope in accuracy and reliability. 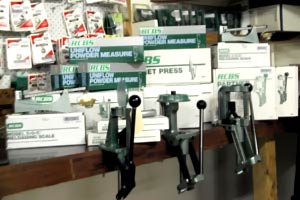 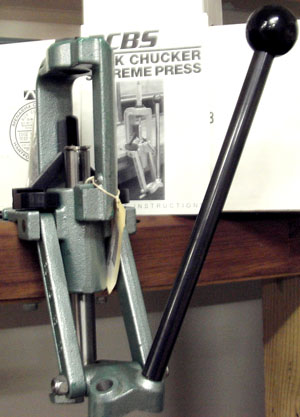 The Strongest Press, Will Even Do up to . 50 Cal Browning.

The ban on the private possession of handguns in Great Britain came into effect in two stages. A Conservative Government banned all large-calibre handguns from July 1, 1997, with a period up to the end of September, in which all such guns had to be handed in to the police. Following a general election in May 1997, the Labour Government extended the ban to all small-calibre [.22 rimfire] handguns, which had to be handed in before the end of February 1998. More than 162,000 handguns and 700 tonnes of ammunition was handed in. More than 80million UK pounds was paid in compensation and the cost of the confiscation scheme to police and government cost tens of millions more.

Both governments promised that Britain would thereafter be a safer place. A few handguns remained for people such as slaughter men, those who could prove a special need for a pistol for the humane dispatch of quarry animals and a few people who had pistols of special historical interest, but in general, handguns could not legally be possessed. The hand-in was complete for all practical purposes because of the system of individual authorization.

Ten years have now passed and it is right to ask if Britain really is now a safer place and whether the ban has prevented criminals from obtaining and using pistols. Using the data, were I a politician, I would simply say that in 1997 pistols were used in 2648 crimes and in 2006/7 [the Home Office has changed the statistical recording figure from calendar to financial year], they were involved in 4175 crimes. Thus, the ban on pistols in the hands of law-abiding citizens has resulted in a doubling of their use by criminals.

Homicide is a difficult class of crime to analyse because of the preponderance of domestic killings. Robbery, however, is a crime committed by more professional criminals who almost invariably have a significant number of previous convictions.

We could fill page after page with statistics and do little more than confuse the true picture. Let me suggest that if anything as draconian as the handgun ban was to have any effect at all, it would show in the six years following the ban taking effect.

If we average out the total homicide figures for the six years before 1997 and the six years after [ignoring the Dr Shipman case], (Note, a Medical Doctor that was poisoning his patients) we see that homicide has increased from an average of 706 to 825 and despite yearly fluctuations, the figure is steadily upwards. This is also so with homicide involving firearms, where the six-year average has grown from 61 to 72 and again with a steady upward trend. The use of shotguns, however, has fallen from an average of 20 down to 11 and sawn-off shotguns from 9 down to 5, but the use of pistols has increased from an average of 29 to 42. But in none of these cases does 1997 mark a watershed. Trends that began long before 1997 have continued entirely unchanged.

Contrary to many claims, the use of firearms in robbery did not increase after the 1997 Act; it fell slightly from a six-year average of 4700 to 4100. The use of shotguns fell more sharply, but the use of pistols also fell, though by only a small amount. However, that these trends were well underway before the 1997 Act and there is no way that the changes can be attributed to that law. The only possible conclusion is that the handgun ban was a complete and pathetic irrelevance to protecting the British public from armed criminals. It has not changed a pattern of increases in crime that existed before the ban.

It might be interesting to note just one source of supply to criminals disclosed by an excellent police operation in London. Baikal gas pistols are made in Russia and are effectively a standard 9mm short self-loading pistol modified to discharge CS powder. Quantities of these were taken to Lithuania where they were very professionally converted into self-loading pistols of high quality. A silencer was fitted and they were packed with a couple of boxes of ammunition before being sent on to Britain, where they were sold at 2000 UK pounds a time to drug dealers and other criminals. Several hundred have been seized by police, but the total number on the streets runs into thousands. Not surprisingly, the handgun ban has had no effect on that trade.

Criminals are, by definition, those who do not obey the law. The absence of legally-held pistols has not stopped them from having whatever class of gun they prefer, including significant numbers of sub-machine-guns.

The Dunblane shootings, which prompted the handgun ban, occurred in the run-up to a general election and that was the single most important factor. The politicians concerned did not care then and do not care now that the whole thing was a pathetic farce.

(Ex -Chief Inspector Colin Greenwood of the West Yorkshire Constabulary is the author of many articles printed in such famous publications as Guns Digest and many others over the last thirty years his articles have concerned Police Training, General Shooting and Hunting, and the futility of Gun Control. His definitve work Firearm Control, a Study of Armed Crime and Firearm Control in england and Wales was preceeded by Police Firearm Training in 1966 and Tactics in thePolice Use of Fiearms. 1969. I had the pleasure of meeting him at a Firearm Conference in Brisbane in 1981. Unfortunatley, for Colin he had made a similar mistake, as I had. He had served in the Coldstream Guards and I had served in the Grenadier Guards so we had a lot to talk about. Even though we may have regretted it at times we were glad we had not missed the experience. Ron)

Drawing Of the Soper Rifle.

The rifle invented by Mr. W. Soper, of Reading, and illustrated in Figs. 1 and 2, was one of the number sent for the recent competition at Woolwich, and was rejected on the ground of “complication of breech arrangement.” In this rifle the breech-piece is formed of a block of steel R, working freely up and down in a vertical slot at the rear of the barrel, and secured to a lever fixed at the bottom of the lock, which is placed in the center of the stock. The striker J is mounted inside the breech-piece, and works easily without any spring. The cock is also secured to the breech lever in such a manner that the breech-piece and cock are worked simultaneously.

The attachment is effected by the swivel H, furnished with a projection and recess for working the extractor L, so that the one movement of drawing down the lever opens the breech, cocks the piece, and throws out the cartridge case. The trigger A is mounted on the lever, and has no connection with the sear E until the breech is placed home, and thus the rifle cannot be fired until the safety catch B is pressed. For cleaning purposes the lock and breech-piece can be removed by withdrawing a couple of screws. Fig. 3 shows a section of the rifling, the calibre being that of the service rifle.

The trials of this rifle at Woolwich were satisfactory. For rapidity twelve rounds were fired in thirty-nine seconds with three mis-fires; the mean deviation of eight shots fired for accuracy from a shoulder rest at 500 yards, with Boxer cartridges, No. 3 pattern, was 2.30ft. Many excellent results have also since been obtained. Nevertheless we cannot but agree with the committee that the mechanism of the breech and lock is too complicated for a purely military weapon, and, moreover, that they were perfectly correct in doubting the value of the safety catch as a substitute of the ordinary half-cock. Mr. Soper has expended a great deal of ingenuity, and has produced a weapon which gives good results, but we think it cannot be denied that it is unsuitable for the use of the soldier.

On Saturday, July 31st, a very interesting competition took place in the presence of Major Sir C.S.Paul Hunter, Bart., between Corporal Bainbridge and fourteen picked men of the battalion using long Enfield rifles and three men using the Soper direct-action breech-loader. The targets were similar to those for the file firing, but only half the usual size. Distance; 200 yards; time, three minutes. Each party to fire as rapidly as they please. The scores were as follows:- Enfield Rifles: 1st squad of five men, 84 points; 2nd squad of five men, 94 points; 3rd squad of five men, 94 points; total, 272. Soper’s breech-loader: Sergeant Soper, 140; Private Warrick, 138; Sergeant Gostage, 110; total, 388. Majority in favour of breech-loader, 116 points. It will thus be seen that two men with the breech-loader scored six points more than the fifteen men with the Enfield. Private Warrick having fired eighteen shots the first minute, twenty one the second, and seventeen the third, making a total of fifty-six shots in the three minutes; and Sergeant Soper having scored five bull’s-eyes before a single shot was got off by the squad opposed to him.

This Newsletter is published by Owen Guns
24 McMahon Road, Gympie
Ph: 07 5482 5070
If you no longer wish to receive the newsletter, click Unsubscribe to have your email address automatically removed from our email list.