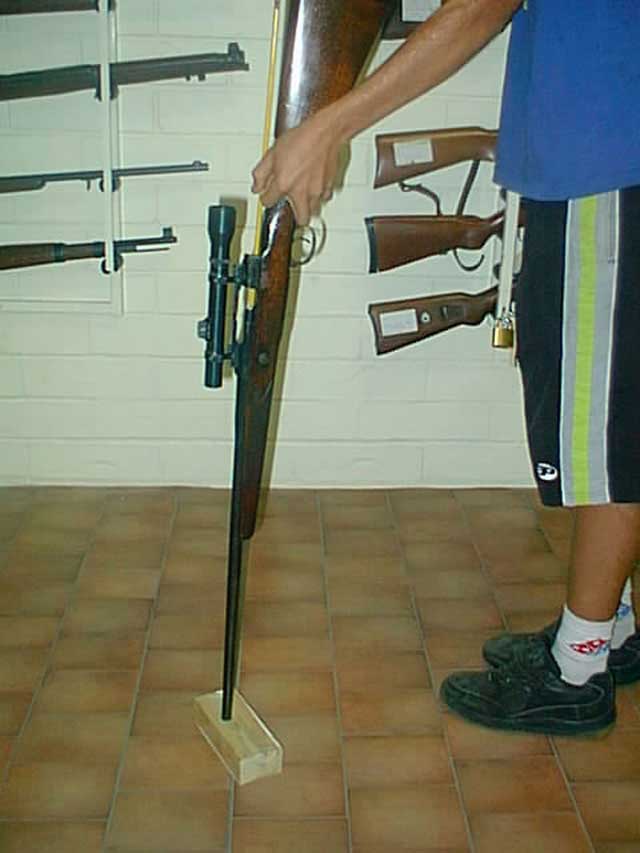 52. Clean the barrel, from the breech where ever you can remove the bolt from the rifle or removing the barrel from gun as in a break barrel shotgun. If you have no padded vice or a cleaning stand, place a little piece of pine board, about six inches square on the floor, this is to rest the muzzle on as you push the cleaning rod through the barrel. Pine is quite soft and will not damage the “crown”( that is the inside of the dangerous end of your barrel the “muzzle” is the outside of the end of the barrel). The wooden block gives you something to push against.

53. Screw on the correct sized Bronze (Brass) brush to the rod, apply the correct solvent to the brush, Rimfire, shotguns and low velocity pistols need only Powder/Lead Remover Solvent. High Velocity Centre rifles that use jacketed bullets need Copper Solvent (such as Whitworth’s Solvent). Rifles that have used ammunition with corrosive primers or corrosive powder also need to use Whitworth’s Solvent. Black Powder guns need hot soapy water or an ammonia/detergent solvent such as Whitworth’s. With any firearm that uses black powder or any corrosive powder or primers it should be cleaned immediately as these corrosive salts form sulfuric acid. The Whitworth solvent is ammonia based and is far more effective in neutralising the acid than hot soapy water. The water also has negative impact on steel and wood.

55. So far as practical, try to run the rod centrally through the chamber so it will not unduly rub and wear either side, support the rod with fingers from the none pushing hand or use a rod guide. Leave for at least ten minutes for any chemical reaction, such as in the copper solvent where the two ammonia based chemicals which are separated while stored in the bottle in a thick detergent react together with the activation supplied by the brush.

56. Many subscribe to the theory that the solvent can be applied to the bore by swabbing with a patch and I will cover that in detail later on, but I believe that the bronze brush has to be preferred as besides its superior abilities in activating the chemicals and distributing them into the pores of the copper plating, they also, more easily separate the smeared lead or gilding copper from the inside of the barrel. Allowing the solvent to get between the fouling and the barrel. 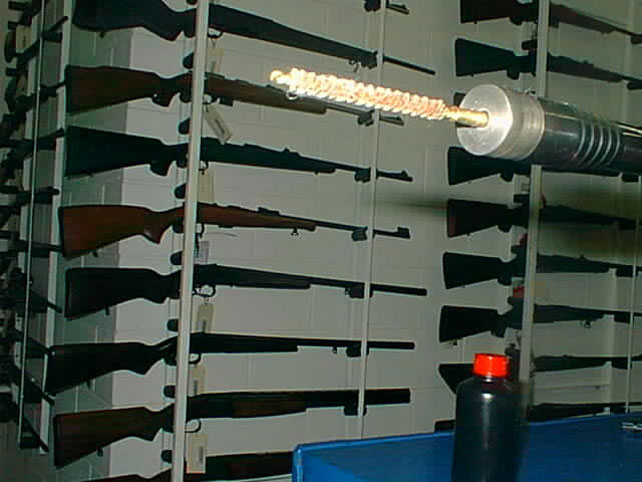 A Bronze Brush activates the chemical reaction in the Barrel solvent.