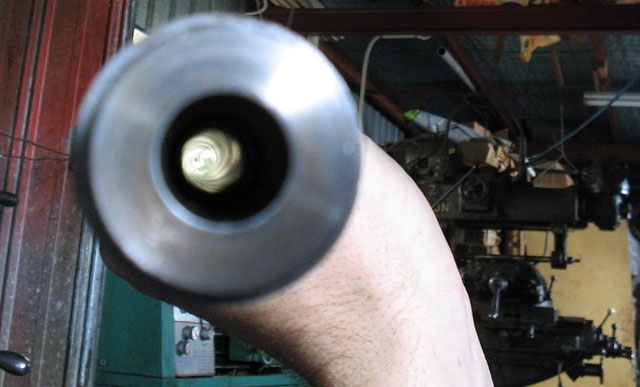 Looking Into The Grooves Of The Rifle Barrel. Barrel Made By Owen Guns.

62. Check for rust pits, oil rings, hornet nests, stuck patches, stuck pull-throughs, copper fouling, lead fouling, little fury animals, lumps of copper from gilding material, or lumps of plastic from shotgun wads or just plain dirt.
Hold the firearm or barrel with the breech end near a light source sunlight or a fluoro-light holding the muzzle six inches or so from your eye, move the barrel backwards and forwards, nearer and further from your eye so that you get a good picture of the surface of the inside of the barrel. Do not just see the bright light through it and consider that its good enough, looking through the barrel is easy you have to look into the barrel, look into the walls of the barrel, try and look into the pores of the barrel, look at the rifling grooves, look to see if the edges are sharp, look to see if the bottom of the grooves are clean and look to see the machine marks in the bottom of the groves. If you cannot see machine marks, maybe your barrel was not machined at all maybe it was born in steel (look for Shepherds and a large Star in the Sky), or more likely they have been worn away, or are full of copper plating from the high velocity jacket bullets you have been sending up there.

63. Oh, the inside looks like an unlit mine tunnel, yes? Well that’s rust pitting and the barrel has to be replaced, or it is a wall hanger.
Cast a shadow up and along the inside of the barrel, is your barrel straight, make a comparison because the shadow will always be straight. Move the barrel backwards and forwards while you are looking into the barrel, now you should be able to look and focus into different sections of the barrel, look for pits or holes in the surface or places wear what should be sharp edges are smooth. 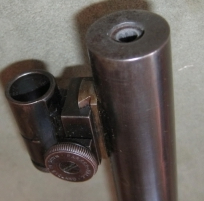 Get The Crown On The Angle And The Light Will Expose Lead or Copper Fouling.

64. Does it still look clean, well take it down, take it outside into the sunlight hold the muzzle just up from your waist and away from your body, make the sun shine into the crown of the muzzle, when that light is streaking into the barrel, look into the sides of the barrel, more than likely you will see streaks of copper or silver gilding metal or in a firearm that uses lead bullets streaks of thin lead. Or you may see Pit holes. Turn the barrel in a clock wise direction so that you can see in all sides as the light will only expose one side.

65. If your really convinced that your barrel is perfect and sinless, and you want to prove it, take the final bullet between the teeth, saw of the last inch of the muzzle re-crown the barrel, take that one inch of barrel and cut it in half long ways open the two halves of the barrel, look into each side now, under the light. The perfect looking barrel, as you used to look through it, now looks like you could have planted potatoes in the pit holes. Except for new barrels of course.

66. Now lets have a look at the breech end if you can remove the bolt or barrel, hold the Muzzle up to the light, hold the breech end about six inches from your best eye, move it backwards and forwards in the same as before looking into the barrel not just through it, when you have the knack of examining the inside of a barrel, then begin to rotate the barrel or rifle as you are still looking in to it, it’s a bit of a knack or a learned process but as it is rotating you will come across other area’s that you had not seen before and you can give them the eagle eye too.

67. If it still looks great, well you do have a rare piece, more than likely you will see shadows or streaks of fouling or the occasional little pin hole. If you think you can remove more fouling repeat all cleaning process, brushing out with solvent and removing the crud with dry patches.

68. Some barrels are harder to clean than others, some, with any brand of ammunition put though them, some are only difficult when certain combinations of manufactures components are used. I have owned and had satisfactory use out of rifles which I have had to scrub and “swab out” five times or more before I have had a clean patch come out of the barrel.

69. Some barrels even though they look perfect and clean easily, still will not shoot accurately, the man who made it might have been having a bad day. Others that look pitted and are always difficult to clean will win you prizes but they are the rare ones. When you put a tight patch up the barrel on the rod and the patch exists the muzzle with symmetrical cuts from the rifling, you know you have a new barrel and the man that made it was attentive to his profession. 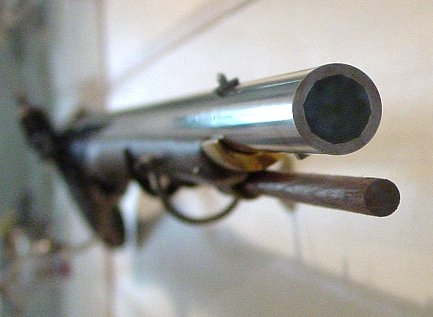