This week it has come to my attention that there is confusion amongst non-shooters as to why people like guns or like shooting. I don’t understand why its so hard to comprehend, what Im learning daily is that we are all incredibly different. I for example love nothing more than throwing a slimy chicken neck down the back of my chops. My old girl is always drinking this purple stuff in a flimsy glass that I knock over occasionally and feel obligated to clean up. Its nowhere close to a good chicken neck but she guzzles it like it was the turkey of chicken necks. Her father or ‘he who must be obeyed” eats mountains of meat and baked beans that makes my old girl dry retch with just a whiff. Her mother “she who also must be obeyed” puts cheese on everything before consuming and “he who must be obeyed” says “its disgusting!”. My point is that we don’t question each others tastes because we are all so different. So if you are wandering why people like guns and shooting I thought I could come up with a couple of reasons for the confused folk out there.

1. The Job.
I know these people as soon as they open the car door to enter the shop, they smell delicious like sweat and dead meat. You guys are some of my favourite customers. They are paid to hunt, to kill the wild critters that treat our farms like an ‘all you can eat buffet’. These are the heroes of our local trade and they need us to supply them with the tools.
Then of course “He who must be obeyed” and all the workers at Owen Guns who work hard solving problems and who spend there days trying to guide shooters in to getting the best products for there needs.
Possibly the most important Job of all is the one defending our country the brave men and women who protect and avenge us. I stumbled upon and old war story when sniffing around “he who must be obeyed”s office. I especially liked this story because it was about a dog in the army named ‘Gunner’ and his master Westcott. It all began when Japanese bombs started raining down on the capital city of Australia’s Northern Territory, Darwin, around 10 am on February 19, 1942, just over two months after the Japanese bombing of America’s Pearl Harbor. After the initial attack, which sunk eight ships and badly damaged 37 others, soldiers went looking for the injured among the rubble. Around 242 people died that day.
Under a destroyed mess hall, they found the smallest survivor of them all, a six-month-old male stray kelpie (an Australian sheep dog). He had a broken leg and was whimpering. Eventually, the injured pup ended up in the hands of Leading Aircraftman Percy Westcott. He made it his duty to get this dog help. Westcott took the dog to the doctor, who said he couldn’t treat any “man” who didn’t have a name or serial number. So, Westcott named the kelpie “Gunner” and gave him the number 0000. Satisfied, the doctor put a cast on Gunner’s leg and set them on their way.
From that point forward, Gunner and Westcott were inseparable. When Gunner’s leg began healing (despite his habit of chewing the cast which of course is like a giant chew toy to us), he would join Westcott on his daily tasks. One day not long after the attack, as the men worked on repairing several planes in the airfield, Gunner started barking and jumping up and down. The men paid no attention to the dog, but within a few minutes Japanese raiders swooped in and commenced shelling Darwin again.
Luckily, the men and Gunner managed to dive to safety, but it was another surprise attack. Well, to everyone but Gunner. In general, Australian Kelpies hear so much more than many other breeds of dogs even more than me. Two days later, Gunner again started making a commotion. This time, the men knew to find cover and prepare for the upcoming attack.
From February 1942 to November 1943, over sixty air raids were commenced on Darwin. Gunner warned the soldiers of nearly every one, saving countless lives. Another amazing aspect of this was that Gunner never barked when Australian planes took off or when they were returning. See we can be war heroes too and definitely pro-gun. 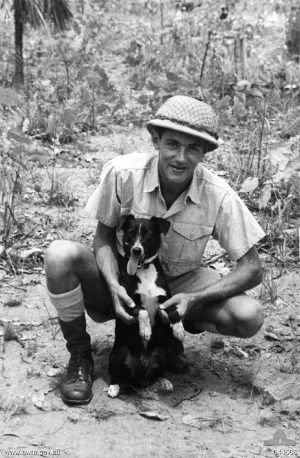 2. The Sport.
There is so much more to shooting than just firing a gun down the range. The challenge of hitting the middle of the target is something which never gets old. So much of the sport is mental with routine and discipline being the important factors in doing well.
Whilst I was taking a leak on an old Gympie Times I sighted an article containing an interview with passionate shooter David Hatherell. He had recently competed in Brisbane and won the service rifle state title holding his title from last year. When asked how he became a shooter he said..“I had always had an interest in the sport because my grandfather Charlie Lund had served overseas. I had heard that the Anzac centenary would be coming up this year and it prompted me to pick up service rifle shooting.”
Then when asked why he loves the sport he stated..“I enjoy the challenge of shooting and all the different variables against you whether it be the distance or the weather. I have played lots of sports but the best friendships have been with my fellow shooters.” My old girl recently went shooting its clearly not her ‘thing’, she jumped out of her skin whenever she pulled the trigger even though she’s been doing it since she was three. So she probably wont become an olympian but she will always have a go.

My old girl often refers to me as ‘the bullet’ because whenever she calls my name I shoot off in the opposite direction with lightening speed. However, real bullets are significantly faster than me and that really appeals to some tech heads and physicists. Also they can make a change in something that is kms in the distance. Firearms have evolved constantly ever since their start around 800 years ago. From primitive hand cannons to automatic weapons. Generally speaking, a “gun” works by channelling the explosive force of a propellant down a barrel, driving a projectile (“bullet”) out of the barrel and towards a target.
The same forces are at work, whether using an antique muzzle-loader or a modern-day rifle or pistol.
Modern ammunition carries the primer, propellant, and projectile all in the same cartridge. The process of firing the gun starts when you load the cartridge into the firing chamber. After loading the cartridge, you aim the firearm and pull the trigger. The mechanics of the gun vary, but a firing pin eventually strikes the primer, which ignites the propellant. The hot explosive gases are channelled behind the projectile, forcing it down the barrel and out of the gun. Sort of reminds me of those times when I have bad wind, everyone gets so upset with me but when those hot explosive gases are tearing through your guts there’s only one place for it to go. Out.

My Old girl tells me everyday that I am the most beautiful little boy in all the world and I have to agree I am particularly easy on the eye. But again it all comes down to taste and I might not always be someone’s cup of chicken necks. I’ve been made aware that some people out there don’t appreciate the craftsmanship and art that is involved in firearms. Firearms are made using a wide variety of manufacturing techniques, from milling and drilling to metal casting to stamping to welding to plastic injection molding to wood carving. There are also more specialized and exotic processes out there like electro-erosive machining and rotary forging. The choice of manufacturing techniques depends on the design of a particular firearm. Originally guns were made by hand. Barrel blanks were forged with hammer and anvil, then drilled and rifled using special tools made for the purpose. Metal parts were ground or filed to shape. Wood for the stock was cut to a rough shape with a saw, and and shaped with hand tools. Some guns are still made using these kinds of processes, but usually automated. 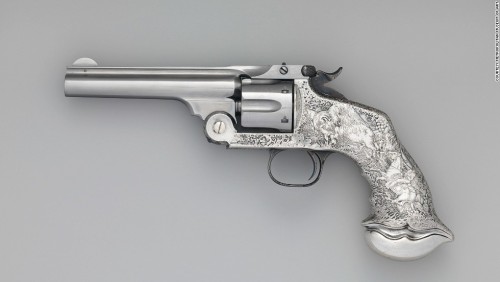 The above close-up of this firearm is a Smith and Wesson Model 3 designed as a promotion piece for The World’s Colombian Exposition in Chicago in 1893 by Tiffany and Co.

I hope this helps those out there who don’t understand why some people love firearms. If you still cant conceive of such a passion come into the shop and watch “He who must be obeyed” talk about them like they are rare jewels. It is a very real passion and it is seen everyday at Owen Guns.