Welcome to the Ninety Third Edition of the Owen Guns Bulletin.
STOP PRESS Classified Guns for Sale – ADVERTISE YOUR GUNs HERE. Selling guns so fast than we cannot photograph them and get them up there quick enough. We need yours to sell on Electronic Classifieds! Only $10.00 and you can place three photo’s of your firearm.

DO YOU WANT TO SELL YOUR GUN? Visit our new Guns for Sale Classifieds listings now

Scroll down for more Free Firearm Manuals & New Latest Version of the External Ballistics Calculator for all Components Not Bullet or Powder Brand Specific. Scroll Down to Free Downloads of 160 Electronic Books such as Rifle Marksmanship by U.S. Marine Corps and other manuals. Also Free External Ballistics Calculator NEW VERSION for all Components not Brand Specific.

Scroll Down and click on FACEBOOK For new Free Download page, Scroll down below.  92 Previous Editions of this Bulletin are available on this site http://www.owenguns.com/magazine/ To Order Goods From This Site. Everything in Stock at the time of publication, we can only hold prices while stocks last. Phone 07 54825070 or 0754824099 in shop hours 9 am to 5 pm on weekdays and 9 to 12 on Saturdays, or fax to 07 54824718 with your credit card details. Details should include Name of card, ie Visa or Mastercard. Name on Card. Number on Card, Expiry Date of Card, 3 secret numbers on the rear of the card. Your home phone or mobile number. How you want it sent to you, ie mail or road freight. The address you want it sent to. Describe which item you want to purchase. Visit this website now. We also have shooting articles and important firearm information for the gun enthusiast. Take away free gun photos and free firearm images for your gun gallery collection. New firearm related material is being added every day. Any Inquiries on any products phone 07 54824099 or 07 54825070 or email owenguns@spiderweb.com.au NEW FIREARM SHOWROOM. CALL IN AND VIEW OUR DISPLAY OF  450 (plus) FIREARMS,
Owen Guns at Gympie  our own Gun Shows permanently so please call in to see us.
For a look at some at our other gun rooms please click on the link below. http://www.owenguns.com/gympie-shop/gun-rooms/
PHONE 07 54825070 for the best price and availability of TIKKA, SAKO ,STEYR MANNLICHER, Mossberg, Stoeger, Thompson-Centre, S &W, Colt, Sabatti, Browning, Remington, Marlin, Zastava, CZ, or any other brand you can think of. PHONE 07 54825070.  Please Travel Safe and Happy.
Any Inquiries on any products phone 07 54824099 or 07 54825070 or email owenguns@spiderweb.com.au 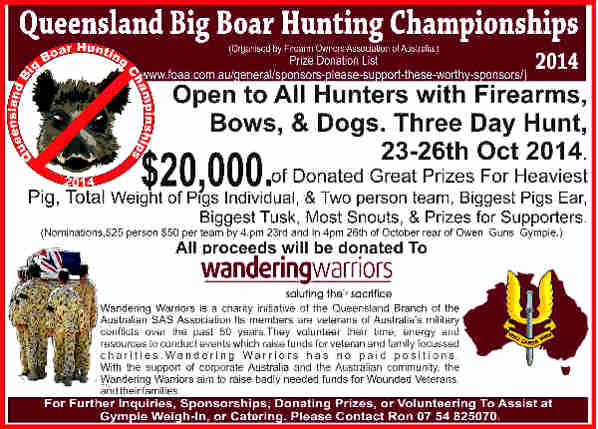 The Firearm Trade and many local businesses have donated over $20,000. of prizes for this event. This event is very important for three reasons,
One to relieve the pressure of Feral Pigs on Queensland’s Primary Producers,
Two to Raise much Money for The Wandering Warriors, SAS (Queensland) for Veterans and their families,
Three and not the least is to prove to the State Government that Recreational Hunting can solve their problems with Feral animals and so open Queensland Public Land to Hunting.
We have to show the government of Queensland that Victoria (who assesses the interstate income from Hunting at $430 million a year) and NSW are not wrong. That Queensland can benefit greatly.
To do this we need thousands of Hunters nominating from all over our State and we need many hundreds of Feral Pigs at the weigh in to claim their prizes. Help us open the door for hunting on public land. Hunt Feral Pigs on any land where you have permission to hunt.
For Lists of Prizes and Sponsors for  Queensland Big Boar Hunting Championships 2014
http://www.foaa.com.au/queensland-big-boar-hunting-championships/sponsors-please-support-these-worthy-sponsors/

‘A’ Bolt Browning Most popular calibre’s in stock. 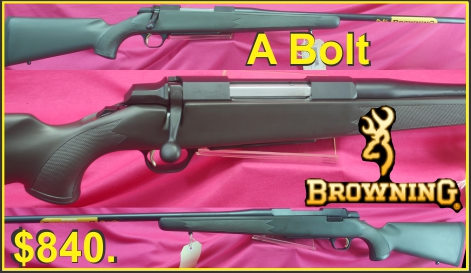 Thoughts for the Week.

The following letter was forwarded to me by one of our readers, who for the good of us all, took the time to write to his local M.P. and pointed out that under the Weapons Act of 1990
35 Acquisition of weapons
(1) A person may acquire a weapon only if—
(a) the person is a licensed dealer; or
(b) the person is the holder of a permit to acquire the weapon and acquires the weapon—
(c) the person acquires the weapon under other lawful authority, justification or excuse.
We say, that if the Shooter’s licence, where every excuse has to be made to own a firearm, been paid for and granted, that is a lawful authority and that due to this provision the demand for a separate permit to Acquire is an additional imposition and fee (fine) imposed by the Queensland Police. The Dealer registers each transaction with the Police in any event.
Since last years Amnesty, when this fact came to light, as Dealers Registered 22,000 firearms to licences without Permits to Acquire during the three months Amnesty, (with no amendment changes to the provisions of the above section on Acquisitions for this period) I have been in regular communication with the Police Minister Office asking them to relate the provision of the Weapons Act that nullifies the above Section 35 (1) ( c) and legislates the imposition of PTA on all Acquisitions of firearms. To date, they have failed to supply that information. The copies of the following correspondence give more weight to our arm, and the Police Ministers admission that there are 600,000 licences in Queensland is contrary to the previous claims of only 200,000 licences. It seems when the Queensland Police want to justify how busy they are its 600,000 and when they want to make us insignificant as a political force to the media and Members of Parliament they say 200,000. 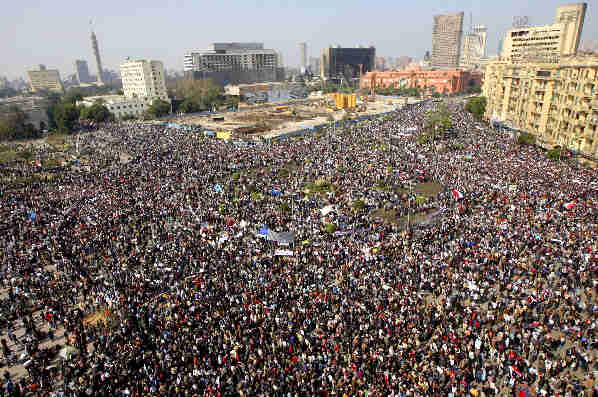 People Power can change the world. We have 600,000 shooters power in Queensland. We have to act together.

We are going to have an election in 8 months time, at present all MPs are very nervous about losing their seats. They know that the public are very unhappy with the current LibNat government that was elected on the still remembered dis- satisfaction of the Blyth Labour government, so expect that at the next election a big swing to independents and new parties. So now is the time, NO MORE PROMISES, the Libs/Nats have to act and implement good changes to the Weapons Act or suffer the consequences of 600,000 voters and their families and friends. 2,445,815 voted at the last state election, Licenced Shooters could effect over half of them. We are no longer a minority. Ron

The Tikka T3 Lite has an all-black stock and a blued barrel. The light but sturdy T3 True Body   fibre glass reinforced polymer stock is pure Sako innovation. The straight stock combines high   performance with light weight ease. Positive checkering provides for comfort and firm grip in all  weather conditions.  In most calibres $985. plus post. Walnut Stocks, Stainless, Heavy barrels also in stock. If you want to order by mail Phone 07 54825070 have your card detail handy. 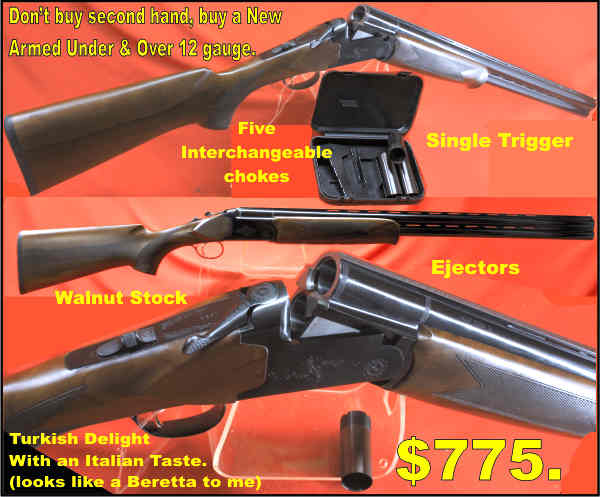 Armed 12 g Under & Over shotgun, steel receivers, single trigger, ejectors, five interchangeable choke tubes the best value in a, new over and under on the market today. Truly a Turkish gun made with from Italian designs, a Turkish Delight with Italian good taste. $775.  Blued or  Silver Receivers 28 inch or 30 inch barrels. Also Smaller Action .410 $775. (Full and Modified,)  Any Inquiries on any products phone 07 54824099 or 07 54825070 or email owenguns@spiderweb.com.au

OWEN GUNS THE BEST PRICES FOR RIFLE SCOPES IN AUSTRALIA.

Tasco 4x 32 Silver Antler Rifle Scope Thirty years ago we would have paid a $1000. for the same quality of vision and precision, a guaranteed leading optical manufacturer who warranties their products all over the World. They have a light gathering clarity that would have made those old dark Pecar’s appear like looking through a knot hole in fathers wooden leg. What’s more they are Waterproof. In 1970 during a storm in the Victorian mountains I can remember emptying my Pecar like a jug. It had a steel tube but it leaked like a sieve. I was so disappointed I hunted Samba for years with open sites as I wanted reliability. I took the low priced option then and will always follow that example, at this price I could afford to buy a spare one. $50. plus postage. To enquire about any product in our newsletter or website, send an email to owenguns@spiderweb.com.au 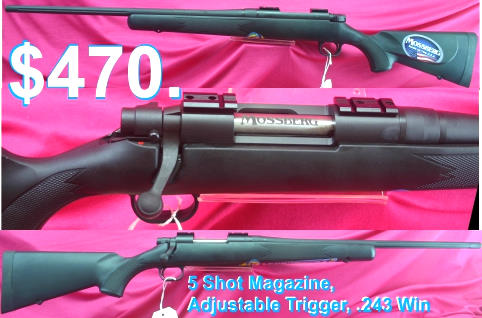 Mossberg  ATR synthetic stock, Adjustable trigger, only in .243win at present $470. plus post.

To subscribe to this newsletter add your email address to the Newsletter sign up field in the right menu column. FREE FOR ELECTRONIC DOWNLOAD Here is a free Christmas Present a Free book, Download this Book the ‘US Army Pistol Trials 1907. http://www.forgottenweapons.com/wp-content/uploads/manuals/1907pistoltrials.pdf

To get more free books from Owen Guns go to Owen Guns Facebook http://www.facebook.com/OwenGunsCLICK the ‘LIKE’ button, in the top centre of the page, or the site will not interact with you. Then you can add, articles, web pages, video’s, photos etc.

You will see the page, but until you CLICK ‘ LIKE‘ the page will not allow you to contribute or ask questions, or comment, nor will it report back to your page when new free firearm books and manuals are available for download. Facebook can assist us to supply the subscribers to this Bulletin with an easier access to ancillary information. Example;- in a previous edition I tried to link in a video clip showing the operational sequence of the Benelli shotgun and a clip of Tom Knapp showing trick and fancy shooting with a Benelli demonstration both failed to some degree. Now, by linking them to Facebook Owen Guns, all those are now there any amount is all possible and much more are coming.

Already there are 164 titles there available for you to download, and more will be up there as soon as time permits. To enquire about any product in our newsletter or website, send an email to owenguns@spiderweb.com.au