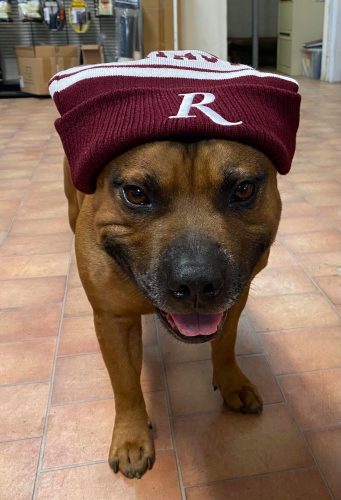 A lot has happened in the last month around the world. On April 9, the royal family announced that Prince Philip, consort of Queen Elizabeth, had died. The Duke of Edinburgh was 99, the nation’s longest-serving consort, and married to Queen Elizabeth for 73 years. India’s main opposition party has called for a full national lockdown, shortly after the country passed more than 20 million Covid-19 infections. From numbers published by the Indian government in 2019-20, there is one doctor per 1,456 people in the country. Then a bit closer to home the chances of a war in the Indo-Pacific region involving China are rising sharply, according to former defense minister Christopher Pyne, who warned Taiwan was most likely the next flashpoint.
We are just rolling with the punches at Owen Guns, with powder being a constant battle but we have a great stash of primers and we are still working on new lines of projectiles that we make on site. People are still bringing their firearms in for storage because Weapons licensing are sifting through people’s applications trying to find something to reject them on. Every week at least someone is coming in asking for help on how to get their guns back. Recently a man rang Owen Guns asking about storage because he had recently lost his license for shooting a target on his 200 acre property. His new neighbor’s had dobbed him in and even told the police he was shooting at them. 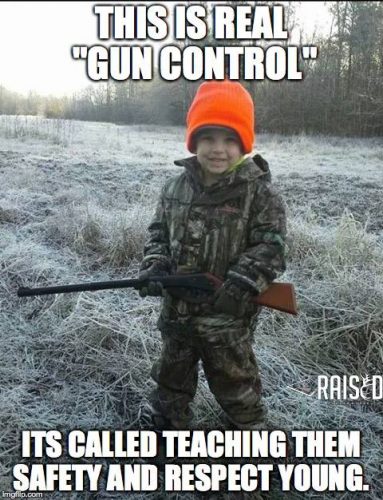 I also hear a lot of people being told by Weapons Licensing that they have to wait 28 days for their PTA’s when they already have several guns. One customer told me that they stated his guns hadn’t been finalized onto his list so therefore he had to continue to wait 28 days for each permit after. If they say this to you know that they are making these excuses up because they are three years behind in their paperwork. If they say this to you go straight to your local member of parliament and make a complaint. Even if you are a patient person and it doesn’t personally bother you, spare a thought for the people that they do this to who are desperately waiting for their PTA’s, who have dogs pulling calves out of cows mid birth. Don’t let this become “normal” or allow them to continue to abuse their power.

None of us at Owen Guns are SSAA members, but one of their members did email us this week and alert us to a segment of their newsletter where they basically threaten their members with losing their licenses if they don’t keep their membership up to date with SSAA……

“We’re also looking at the tricky topic of the three-month allowance for those who let their SSAA membership lapse. Police are now developing and implementing online real-time management of our memberships and licensing, so if you rely on SSAA as the genuine reason for your firearms license, if your membership lapses police will know and in some states will act to remove your firearms. Your membership is important – do not let it lapse.”

They are reporting to the police and helping them obtain information about you, they are not looking out for shooters, they are one with the police. There are other clubs; you do not need to rely on these traitors. I’m personally with the local Small Bore Club, the Indoor Air Rifle Association and Shooters Union. None of them care if I only renew when it’s time to renew my license. None of them report to the police if my membership lapses 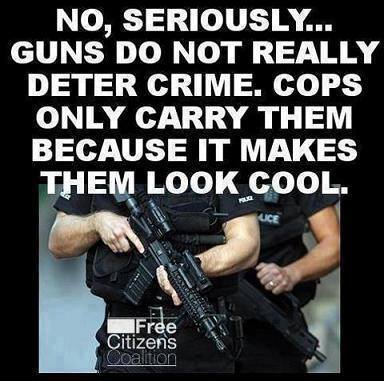 In previous newsletters I have touched on the divide in the USA since President Biden was appointed in office. Also that he is trying to bring in gun laws to apparently fix the embarrassment that is the United States when it comes to gun crime. I recently came across this speech from April 3rd, 2018, where resident Mark Robinson gave an impassioned speech at the Greensboro, NC, city council meeting in support of the Second Amendment. This speech is the best four minutes you’ll ever watch about how important gun rights are to the majority of American citizens. https://www.youtube.com/watch?v=NIwf3d7hP9g

Where is the support for the majority? Where is the support for law abiding gun owners? He say’s every time there is a mass shooting the government puts the blame at the feet of the law abiding gun owner. They want to restrict the rights of someone who has never stepped a foot out of line instead of putting the blame where it belongs. Criminals will continue to be criminals no matter what the law says and the only people who will suffer is the law abider. His concern is for his safety he has guns for protection, he is fearful that the police are already too busy and he can’t rely on them for his family’s protection. Whenever the States have a gun debate we always catch the lefty waves of it over here for example ‘The project’ did a segment on Port Arthur recently because it was the 25th anniversary since the tragedy. 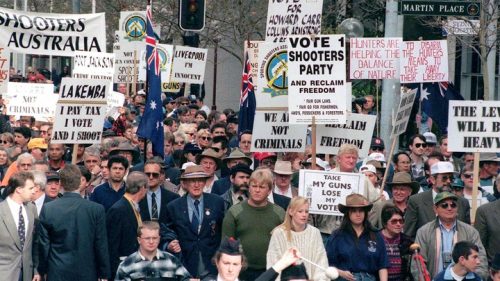 They exonerated John Howard and Rebecca Peters for fighting for gun laws; they clung to their statistics of a massive decrease in gun ownership as a success and stated that gun violence had dropped. Statistics do indicate a drop in firearm suicide and homicide since 96 but overall suicide and homicide continue to rise with what I’m assuming is a population rise. It’s just that now there are other culprits people don’t have guns but they have knives, rope, gas, cars so the murder and suicide rates remain overall unaffected.

The Effects of the 1996 National Firearms Agreement in Australia on Suicide, Homicide, and Mass Shootings printed these two graphs….. 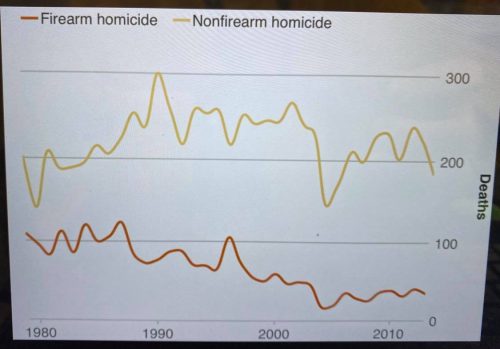 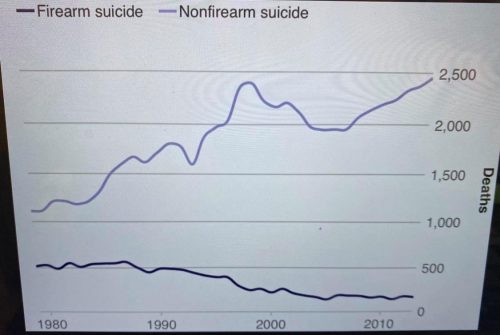 None of the studies reviewed in McPhedran (2016) found statistically significant evidence that trends in firearm-related homicide changed after the National Firearm Agreement.

It’s impossible to know how many firearm owners there were before the NFA because we had no register back then. Information from the ACIC suggests that firearm ownership has indeed risen since the buyback.

In June 2012, the ACC report on illicit firearms noted that there are more than 2.75 million registered firearms in Australia held by more than 730,000 individual license holders

So what has the National Firearm Agreement Achieved? Helped police get there quota up? Brainwashed people to have an irrational fear towards inanimate objects?

Unless there is a good war the government is unlikely to change its stance on gun laws because with a community disarmed all the power is with the police and criminals, which are sometimes one in the same. What chance do we have?

Speaking of war Prime Minister Scott Morrison has backed Defence Minister Peter Dutton in warning Australians that we need to be prepared for military conflict with China. Defence Connect wrote this on the 6th of May… 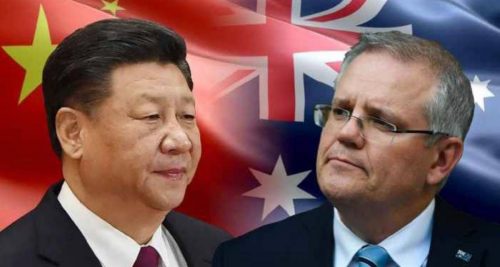 “The Chinese government announced that it has “indefinitely” suspended discussions with the Australian government under the China-Australia Strategic Economic Dialogue, a move announced by China’s National Reform and Development Commission. Some Australian Commonwealth government officials launched a series of measures to disrupt the normal exchanges and co-operation between China and Australia out of cold war mindset and ideological discrimination, the National Development and Reform Commission outlined. China’s National Development and Reform Commission is one of the nation’s leading economic and planning government bodies. The announcement is the latest in a series of diplomatic exchanges between the two counties.”
The Sunday Morning Herald also published an article on the 4th of May with more detail on the conversations being had in parliament. One of the nation’s top military commanders told his troops that Beijing is already engaged in “grey zone” warfare against Australia and they must plan for the high likelihood this may spill over into actual conflict in the future.
The candid and confidential briefing by Major-General Adam Findlay to Australia’s special forces soldiers last year gives the most detailed insight yet made public into how the nation’s top military planners view the threat of China.
The then-special forces commander, who has since stepped down but who still advises the Australian Defence Force, highlighted the steps Australia’s military was taking to prevent war but also described a “high likelihood” that actual conflict could break out due to the unpredictable nature of foreign affairs.
“Who do you reckon the main [regional] threat is?” General Findlay asked his troops and officers before answering: “China”.
“OK, so if China is a threat, how many special forces brigades in China? You should know there are 26,000 Chinese SOF [Special Operations Forces] personnel.” 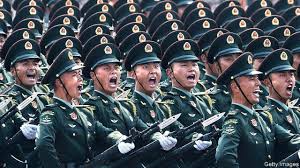 I must ad that they have Special forces for Army in every province with different training and leadership. Also Navy, Air Force and Police are all separate and have special operations maybe just mention that there full time Peoples Liberation Army is 2 Million and that does not include millions of militia, the Navy, Air force and Police.
Details of the April 2020 briefing have been obtained by The Age and The Sydney Morning Herald from multiple sources who have requested to remain anonymous because they are not authorised to speak publicly. They say General Findlay told his troops that, if the threat of conflict was realised, the ADF needed to rely not only on traditional air, land and sea capabilities but also on Australia’s ability to use cyber and space warfare.
He also highlighted the need for the ADF to reassert its presence and play “first grade” in south-east Asia and the south-west Pacific, describing how the military had uncovered information showing China was seeking to exploit “our [Australia’s] absence” in the region.
“We need to make sure we don’t lose momentum … get back in the region,” General Findlay said, highlighting Australia’s close ties to Indonesia.
In the past week the Australian government’s language on China has hardened. Defence Minister Peter Dutton has said a war over Taiwan could not be discounted, that Australia was “already under attack” in the cyber domain and that he wants to have a “more frank discussion with the public” about China’s intentions. Mr Dutton said the Australian government’s first priority was “continued peace in our region”, but warned the country needed to be able to defend its waters to the north and west as a priority.
Influential public servant Michael Pezzullo, the Department of Home Affairs secretary, warned the “drums of war” were beating. 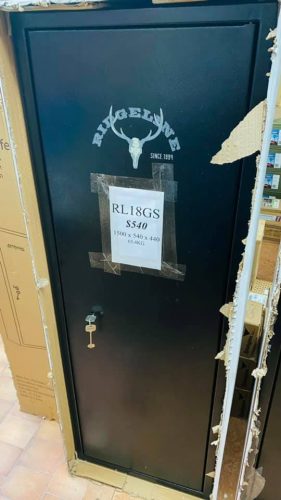 We are now your one stop shop for rifles and chainsaws!!
Mauser model 18 stainless threaded barrel package deal with a Husqvarna 120 mark 2 for the excellent price of $1636