The Individual Verses the State. Part 3

Gun Laws it has been a Confidence Trick.

This simple two-way analyses on people/firearm controls and it’s effects in the major countries of the English speaking world indicate that all these arbitrary firearm controls have failed to reduce violent crime. Subsequent to this, it suggests that in most area’s it could be responsible for the increase of violent crime. Disarming the people has not reduced criminal violence in any country examined here: not Great Britain, not Canada, and not Australia. In all cases, the means of community disarmament have been ineffective, expensive, and very annoying to the citizens who have lost there private property. In all instances, the method has necessitated establishing extravagant bureaucracies that propagate negative influences in public safety. Disarming the community passionately increases the distrust in the controlling bureaucracy that impose it, alienating the community and completely destroying their enthusiasm to comply with other legislation that may have sane objectives. The perception of resentment grows with the inhumanity of the restrictions and with the easily observed ineffectiveness of their consequence.
. 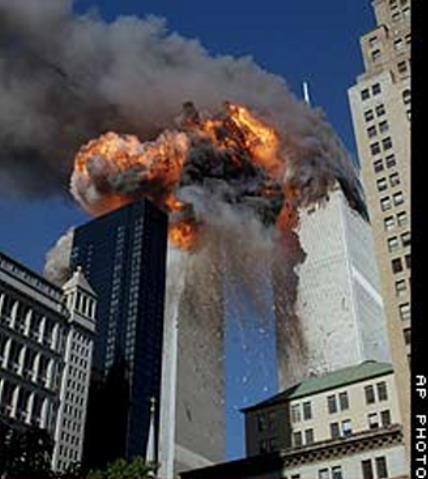 “Beware the leader who bangs the drums of war in order to whip the citizenry into a patriotic fervour, for patriotism is indeed a double-edged sword. It both emboldens the blood, just as it narrows the mind. And when the drums of war have reached a fever pitch and the blood boils with hate and the mind has closed, the leader will have no need in seizing the rights of the citizenry. Rather, the citizenry, infused with fear and blinded by patriotism, will offer up all of their rights unto the leader and gladly so, How do I know? For this I have done, and I am Caesar” Julius Caesar. 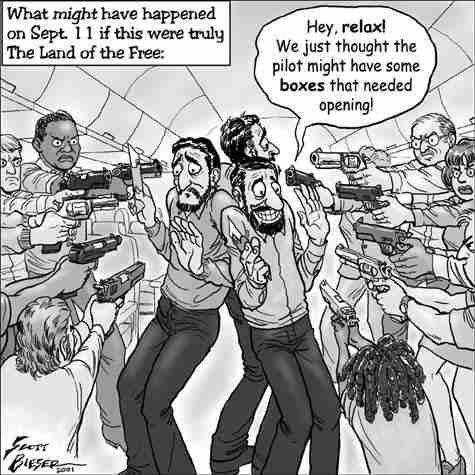 One firearm in a civilians hands on each of those airliners on ‘911′ could have saved thousands of lives on that infamous day. When Israel has a spat of terrorist attack they respond by issuing another 60,000 hand gun licences, John Howard uses the the  Bali Bombing to correctly explain to us that all Moslems are not terrorists but hypocritically attacks, blames and disarms every licenced Pistol shooter, depriving them of their legally owned property on the threat of prison, they of course must all be guilty, they all must be a threat because one un-licensed, non-English speaking, non- Australian, member of a pistol club killed two of his Chinese flat mates.

“The people of the various provinces are strictly forbidden to have in their possession any swords, bows, spears, firearms, or other types of arms. The possession of these elements makes difficult the collection of taxes and dues, and tends to permit uprising. Therefore, the heads of provinces, official agents, and deputies are ordered to collect all the weapons mentioned above and turn them over to the government.” Shogun Toyotomi Hideyoshi, August 29, 1558

Reason, forces us to ask why it is so necessary for all political party machines to disarm the populations of the western countries? The first answer and most powerful driver, is fear, they fear the armed individual, they fear even more the knowledge that those individuals can work cohesively together and historically for seven hundred years have not suffered servitude and slavery. The second minor answer is because, “They can, and do get away with it”.
Frederick Douglas, a Civil Rights Activist, said 1857“Find out just what the people will submit to and you have found out the exact amount of injustice and wrong which will be imposed upon them; and these will continue until they are resisted with either words or blows, or with both. The limits of tyrants are prescribed by the endurance of those whom they oppress.’
In the 21st centuries so called western democracies, slavery, serfdom, servitude, oppression are words that seem far away, in our nation of supermarkets, welfare, subsidised drugs, free Television entertainment. Serfdom and oppression relate to the medieval times or Soviet Russia, or third world countries. Many cannot see that what these words are related to the disarmed individual. The first 20th century national firearm legislation, was introduced to the British parliament in 1903 due to the fear of a socialist revolution, then again in 1919  fearing the spread of Russia’s Communist revolution, then in the General Strike of 1926 that fear provoked more firearm legislation. It is driven by fear of losing control of the oppressed masses, you cannot make armed individuals queue to enter Gulag’s, or Concentration camps or the Cambodian killing fields. 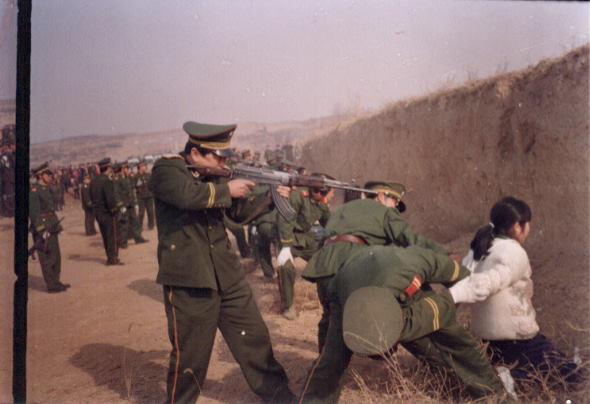 Picture of Women being Shot
Up until the 14th century, wealth allowed armed horse cavalry, knights, Hi Tech supermen to dominated and oppress individuals for a thousand years. Infantry, peasants individuals, there only purpose was to feed and cloth their masters, they were easily replaced and were not even counted or named if they died in battle. From the end of the Greek hoplites period to the beginning of the English/ Welsh yeoman armed with the long bow, the trained few with prohibitively expensive high tech armour and horses dominated the individual serfs. Until warfare was revolutionised, the common man had no importance, and as an infamous Abbot said, when he was confronted and forced to negotiate by the revolting English peasants, “That they owned nothing legally but their bellies.” He was wrong, and within a few years of his quote, the impoverished man’s ability to manufacture and pull a 6ft, 120 pound pull long bow, which doubled the velocity of it’s predecessors, and its 36 inch, spinning, (due to fitting helixical goose feathered flights), steel tipped, greased arrow could transfix, the best armour the world could make, nailing the knight through the saddle and killing the horse. This changed the world. When at Agincourt, King Henry V and his “few” knights fought on foot, to protect his most valuable assets, the yeoman archers, of which 6,000, faced a French army of 60,000 and killed 10,000 knights, took thousands of prisoners and routed the rest, the individual with his individual weapon was once more of value. When armed citizens bowmen confronted the  armoured knights their only recourse was flee to there castles.

“If ye love wealth better than liberty, the tranquillity of servitude better
than the animated contest of freedom, go home from us in peace. We ask not
your counsel or arms. Crouch down and lick the hands which feed you. May
your chains set lightly upon you, and may posterity forget that ye were our
countrymen.”
Samuel Adams,